Its time to Re-Start. Working together will be much more fun than before. The much awaited Dockers container is finally coming on Windows. Linux developers use containers to isolate multiple applications and containers are build up with shared OS which means more efficient than usual Virtual Machines(VM). Docker has already created a buzz in the market with just 20 months of its evolution. Microsoft’s Azure cloud service has the potentiality to create Docker containers but the partnership will strengthen it more into the world of Docker containers.

Dockers Container in windows server means open solution to both Linux ecosystem and the Windows Server ecosystem. Microsoft is clearly aware of the growing trend of Docketing hence heavily involved in making Docker’s engine for Windows Server a success.The containers developed will be mostly under the aegis of the Docker open source project. Docker is ease to use, deploy and manage containerized applications. Developers will use the same tools, container and without changing any code while development.

So in near future we can build an application in windows and manage it in Docker. That is multiple built in development environment on a single platform. This implementation will be the most famous container technology ever. 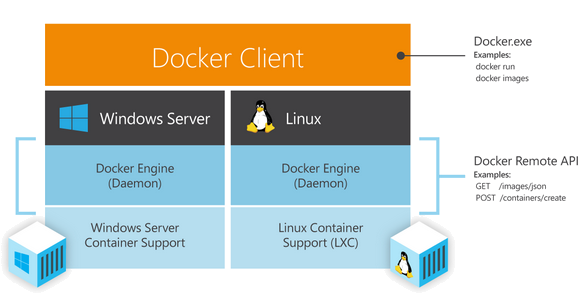